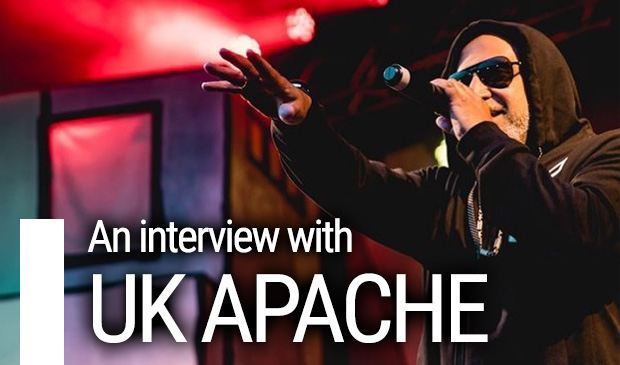 ‘Original Nuttah’, the classic ’94 release by Shy FX & UK Apache, was the first ever jungle tune to break the UK top 40; a rousing, iconic anthem that can still unite a crowd with cries of “nah-nee-nee-woh-oh-oh”!

This summer – 25 years on from the original release – Original Nuttah was given the full makeover under the title ‘Original Nuttah 25’ – re-mastered version of the track with even tighter, crisper breaks, new production and re-recorded vocals from UK Apache.

At this year’s Lazy Sunday Festival we caught up with UK Apache (real name Abdul Wahab Lafta) just prior to his blazing performance to chat about the new release, his hiatus from the scene, and what it really takes to be a “nuttah”!

Yeah, 25 years right now… The new release is a retake on the original tune – Shy rebuilt the rhythm perfectly and I had to squeeze my balls to get the same pitch! And the Chase and Status remix featuring IRAH is a banging remix – everybody is going mad over it.

How did the Idris Elba vocal come about?

As we always say – we give thanks to the Almighty you know! Whatever the Almighty put down he must have guided Idris Elba to do this… but obviously it’s through a link with Shy FX! I haven’t met him myself personally but I hear he’s a big fan of the track – he loves music and he’s a very inspired person himself. Just look at the things he’s done, the man’s the legend already y’know, so to have him on Original Nuttah 25 was like wow! We were waiting and Shy was like “you know it’s going to come” and when he sent it to me out of the blue – cos that’s what he did – I pushed play and I heard this voice and I just started to jump up and down like a nutter!

25 years ago could you have ever envisioned the success of that one track?

No, no. I knew it was good when the track was recorded from the way it sounded and the response it was getting at that time, but a lot has happened in 25 years – I mean, I left the scene for 10 whole years. Some people like to say that the track is old skool but it’s not old skool, I always say an old skool track is when you pick up something and it’s got dust on it… and it’s obviously not new skool… I call it the teacher for the school because it’s a track that hasn’t stopped playing since it came out.

Well, to be honest the first track I did was with Potential Bad Boy, one of the best jungle producers of all time, and his manager at the time was Paul Ibiza who was also running Jungle Fever. I just loved the idea that this music was British as well, you know? Before I chose the name UK Apache there was Apache Indian and I had that name as well. He was very successful and I thought “what can I call myself”, so I thought “I’m from England – I’ll call myself UK Apache”. So, when jungle music came about, and being British, I was like “yes” you know what I mean? And the vibe of it by that time, it had loads of samples and the producers wanted to get live vocals so I guess I played a part in that. And then hearing the tune from Shy FX… I kinda write songs in my mind, I memorize them so I had Original Nuttah already written 10 years before I even met Shy FX, it was just in my head. And I usually wait for a rhythm to put the song on and that just fitted you know?

Yeah, that’s right, there are many nuttahs but there’s only one original nuttah and I believe this title was given to me by the Almighty. Saying that – not being boastful – but it’s part of many things I do, so for me a nuttah is a person who achieves their goals. It’s not just a badman or a badboy it’s somebody who achieves their goals in anything they want to do that’s positive – whether they’re taking exams, getting the job they want, training in the gym, helping humanity, stopping wars, being a politician and doing good things for the people, you know what I mean? Uplifting… just being good to your neighbours, good to your parents or doing uplifting things – that’s a nuttah.

You’ve done a lot of work with youth groups and youth clubs – do the young people recognise you for what you’ve achieved as UK Apache?

Yeah, I’ve worked as a youth worker for a few years and at the beginning they didn’t know who I was but then later on, when they found out, they were surprised that I was working as a youth worker. But that’s what I did when I took time out from the music industry. My story is a long story, when “Nuttah” came out there were a lot of problems and I didn’t sign the deals that were on the table. Shy FX reminded me of a statement that he said he respected me for that I’d forgotten. He said “you said if it’s meant to come back around it will and you walked away from £50,000 to £100,000”, which at that time was a lot of money. And look, it’s come full circle around now, so yeah it was written by the most high and he just gave me the inspiration to say those words. I’ve worked in a different jobs y’know – hospitals, factories, shops – but yeah when I worked in the youth clubs they were surprised. But it was a bonus for me too because I connected with the youth – I’m quite a community man in that sense and I like it like that you know? I like to show people respect and I like to get respect back.

When you left the scene for 10 years was that for spiritual/religious reasons?

Well, not really… My mum found out she was terminally ill, she had cancer and basically – may Allah bless her soul, may God bless her soul – she lived for one year and then she passed on, but they said she’d lived for 3 months. I was there from the beginning to the end and I was there looking after my mum. I’m a single child – my mum and dad divorced when I was 1 year old – so she was like my light on the earth… the only woman I’ve loved that can’t be expressed by words. Everything has a start and an end you know? We believe that in my faith and even in the Quran it says “every soul will taste death, then to us will yo be returned” so I could accept that she was going to go back to the Almighty but obviously, at that time, I just had to be with her. After that I left the scene and I needed to reflect. I needed to see where I was going and who I was and I think those 10 years were really useful. My grandmother was left and I look after her even now – I became her full-time carer just like I became the carer of my mum before that. But, those years made me reflect and coming back after 10 years was kind of a blessing aswell because people are just so happy to see me again you know? If I was still there it wouldn’t really be anything special… maybe you wouldn’t even be doing this interview if you see my point! We say we have plans but the Almighty is the planner of the planners…

Do you have any plans coming up for new music or big events?

Well that’s a good point… I have got some new tracks and I’m hoping to work on some more and see what happens. I like to do positive things. I always tell people if you see me on the bill – and some people say “I’ve never seen Apache” – just reach there because I don’t know how long life’s going to be, and also I don’t know how long I’m going to be in the game. If I don’t think it’s really going forward I’ll try to leave it at a good point, and this time if I leave it I don’t think I’ll be coming back. But I’m in it now now and I always try to give it my best when I’m in something.

And are you enjoying gigging?

Yeah, the gigs are good. The only thing obviously is I’m a bigger man now, a different age. I still train and in good shape but it’s not easy sometimes you know? When you’re younger you’re able to jump around more but people are still saying I’m jumping like a nutter anyway! With the vibe and the love of the people… of course I’m going to love it, and I respect them for that because you’re nothing if the people don’t appreciate what you do. You’ve got to believe in yourself first, but it’s nice when the people appreciate it as well.

The performance at this year’s Lazy Sunday Festival – that immediately followed this interview – tore the place up. The energy for those 15 minutes was intense and such a high – if you get the chance to catch him perform make sure to seize the opportunity because, as the man himself says, “I don’t know how long I’m going to be in the game”.

Original Nuttah 25 is out now and you can keep up to date with all things UK Apache by following him on Facebook.