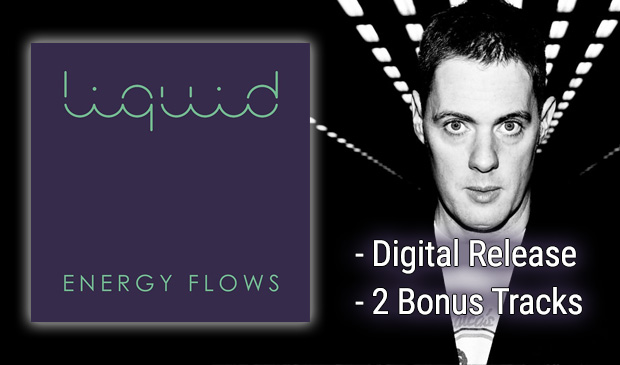 As an album, “Energy Flows” did a great job of combining the vibe of early 90’s breakbeat with a more sophisticated, techno sound, producing a rich listening experience that was greater than the sum of it’s parts. For the full review of the vinyl release check out this post.

If you don’t have time to read the full review then perhaps this quote will give you an idea of how we felt:

“If the early 90’s vibe combined with a sophisticated techno influence appeals to you then do yourself a favour and buy this album. For many of us Liquid represented a particular moment in time, but on the basis of this album Eamon Downes very much remains a prominent player in the world of contemporary dance music.”

Where the original album packed in 12 tracks encompassing breakbeat, techno, reggae and house, the new digital release also includes the 90’s inspired piano vibes of “Don’t Give Up” and the richer, beautiful instrumental of “Narcotic Fog”.

Although, from a tonal perspective, “Don’t Give Up” fits more comfortably with the rest of the album (the uplifting blend of pianos, stabs and vocals reminiscent of the album’s opening track “What Is This”), the track that really adds value to the package is “Narcotic Fog”. The opening strings and arpeggio synths build beautifully before giving way to an emotional mix of breakbeats and piano. “Narcotic Fog” is a tune that could easily be twice as long with no complaints!

If you’ve not already picked yourself up a copy of “Energy Flows” then now is the time. Not only is it now more accessible to those without decks, but you have the added incentive of the two additional tracks.

If you have already bought the vinyl version and are feeling short-changed don’t despair, copies of the new tunes will be sent to you free of charge.

The digital version of Liquid’s “Energy Flows” can be bought from Music Mondays.