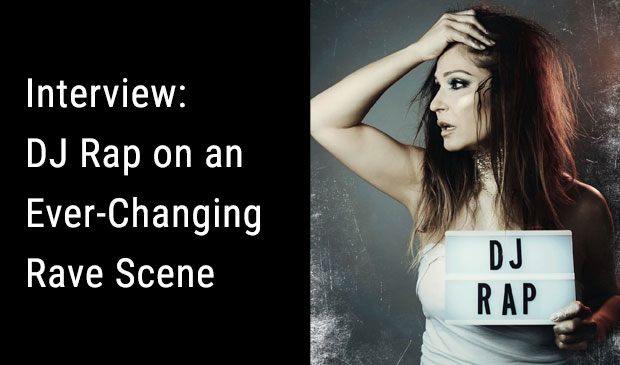 Drum and bass pioneer Charissa Saverio – AKA DJ Rap – has been a driving force in the scene since it’s very inception, having started out playing acid house before progressing to DnB via hardcore and jungle.

Rap now teaches music production, manages two record labels (Propa and Impropa Talent) and has her own line of clothing – all this while still DJing worldwide, producing, acting, singing, scoring movies and penning an autobiography!

To coincide with the release of ‘United Nation: Three Decades of Drum and Bass’ we catch up with Rap to reflect on what it takes to succeed in the ever-changing music business and how the rave scene has evolved over the last 30 years.

‘United Nation: Three Decades of Drum and Bass’ was released just last week – how did you come to be involved with the film?

Well that was when I was on one of my many visits here and Terry called me and asked would I be interested in being part of a documentary. When Terry asks you to do something you know it’s bona fide and authentic, so I didn’t have any hesitation. I’ve worked with Terry for years and years and I like what he does – and I like him, he’s a good guy – so yeah, hopefully he’d filmed me in a good light!

When the scene split in the early 90s what made you follow the jungle path rather than techno or house?

I was creating music in 1988 when I had my first record, well before drum and bass was even a thing and for me my roots are firmly embedded in house music. That progressed into happy hardcore and then jungle came about. I just followed the natural progression of what was most interesting to me production-wise and what was pushing the envelope. For me drum and bass was so mature and dark and I hadn’t experienced the way that darkness can rub against beautiful melodies before. Happy hardcore was very upbeat with lots of speeded-up vocals and although it was a lot of fun there was a certain innocent childishness to it. I was just at that point where I was like ‘I love these tunes but I can’t keep playing the same tracks over and over again’. It would just drive me mad as an artist you know? For me, drum and bass was such a headfuck production-wise, it was such a challenge. I just thought ‘right, game on’ and it kept me interested for years and years.

But you’ve produced many different genres…

Yeah, I’ve produced all kinds of music and especially music for film – my IMDB is pretty extensive. Then I made songs fusing all the things I loved about hardcore and drum and bass and all those elements. When I did it it was considered a big no-no, you don’t do this, but now of course everyone is doing it. Pop culture isn’t just straight pop songs anymore like back in the day, it’s all fused with electronic elements. What brought me back to focus on jungle so much these last few years that I’ve been coming back here is really simple – for me the scene has just gotten good again. I feel like it’s got the roots of jungle but with modern production. Like with anything that you do for a long time you can get tired of it, stop feeling it or become musically impotent and not be able to write about anything. I suffered from the last part where I just didn’t have anything to say musically-speaking. I had a couple of conversations with Fabio where he was like ‘you really should come back, people are making tunes like you made but with a modern twist’. So, when I was coming back to the UK and just raving, I fell in love with it all over again. I was at a rave – I think it was with Hospital Records – and Metrik was playing; I got on a podium and was dancing my arse off and I was just like ‘I fucking love this’.

If you’re not passionate about it there’s no point because there’s such a lot of work. I run a business – it’s what I do for a living – I don’t have a day job, this is my job. Music’s been my job since I was 14 years old and if I want to make a living from music then that means I must do everything to do with music that can bring me income. That way I don’t have to go and do something I don’t feel passionate about. This is my calling and when people say, “hey, why are you doing something else” I say, “have you looked at record sales lately?”. Since this thing called the internet came along, they don’t really exist. Touring isn’t what it used to be in the sense of financial gain so although I love doing the gigs, I don’t do them because I have to. I don’t want to be driving up and down the motorway exhausted doing every single gig there is. I’d much rather be at home doing business for my label. You must remember that at my age I’ve been doing this for a long time and for me it’s nice to do the right gigs, not every gig.

Do you think it’s possible these days to have longevity in the scene as just a DJ?

I don’t think anything is impossible. But then these days we’re in the era where you don’t have to have talent to be famous or rich or special. We’ve got people who are reality stars because they’ve got a big arse and they spin that into something very lucrative. Whereas the thing I love about being in this scene is that it really is about your skill and I hope we don’t ever get to a point where we are just famous because we can play two records. I don’t believe that’s the case with drum and bass – in the more commercial world yeah, I’m sure that all you have to do is be a Paris Hilton type and hit the sync button at a festival. But that’s not what drum and bass is about – it’s authentic, and that’s why we love it and guard it fiercely. I don’t think there’s any DJ right now who’s really successful who isn’t running their own empire – they’re all doing it. Look at Andy C, look at Playaz… Every single person has a label and a business that they’re running and need to keep flowing.

How do you feel now that technology has made it so accessible for people to put ‘DJ’ on their CV?

In one way I think it’s a great thing because I believe everybody should be allowed to enjoy music and its technology because it enhances the production of music and makes everything easier – and we all want that. At the end of the day nobody wants to be cutting to tape, however what I don’t like is when people think that just because they can do that that makes them a DJ. When they don’t understand what the journey is when you’re putting together a set – you can’t teach someone instinct, you can’t teach someone the ‘feels’, you either have it or you don’t. A DJ’s job is to be telepathic, to walk into a room and know exactly what record that crowd needs, and then know exactly what record should go next, and then next, and then next… The greatest DJs in the world make it look like it’s effortless mastery but in fact it’s building a journey so that people understand that you’re taking them somewhere through peaks and valleys in the music. That’s not something that technology can teach you, that’s an instinct. Anybody can learn the mechanics but not everybody can learn the ‘feels’.

A major change over the course of your career has been the introduction of social media – how do you feel that has impacted the scene?

I think it’s great for artists and I think it’s great for those who have their own business. For me it really helps my business – it means I don’t have to pay to get the word out, or I don’t need a radio plugger. At the end of the day you can either choose to hate something or you can choose to work with it, and as Bruce Lee said, “be like water”. Obviously there’s the other side of social media that segregates people, or where people are only posting what they want you to see, or the whole thing about body image. From an artistic or business point of view I feel it’s a useful tool but then I don’t use it to post about boring shit! I don’t like to open my life up so that everybody knows what’s going on every second of every day.

Back in the early days of rave the image so often projected was very much one of peace, love and unity. Was that authentic at the time?

It definitely was more authentic then, and I think there are some people who are still trying to make that happen now but mostly what I see these days is everybody just out for themselves; records put out with major labels that don’t bother accounting and people who say they’re going to do the right thing but don’t. And you’ve got DJs who’re pretending to write tracks when they don’t, and they get in positions of power. It’s a load of bollocks now that didn’t happen before. Authenticity, at the end of the day, is what has been lost. There are many people still struggling to maintain that and then you’ve got people coming in and not playing by genuine rules. Again, that’s what I loved about drum and bass – it was always about how good you were – when the fuck did we allow DJs who don’t really produce to pretend that they are producing? That just wouldn’t have happened back in the day. At the end of the day you’ve got to look at yourself in the mirror each night and know how good you are. No-one can steal your greatness.

Do you get nostalgic for the old-skool scene?

I’m not nostalgic in the sense of music or moving forward – I’m always trying to do what’s new and I love and embrace technology – but I am nostalgic for the closeness that everyone had. There’s not enough of that and everybody is just doing as many gigs as they can. No-one is really hanging out with each other and it’s become very segregated. It’s just different isn’t it? You can’t live in the past.

What projects do you have coming up?

On the 27th of February, The Back 2 The Future series continues with the “Intelligent Woman” remixes, and then on March 26th, the “Rumble” remixes come out. I’ve also got a collaboration with Top Cat that’ll be released – there are a lot of records coming… I’m also opening my Patreon channel soon where there’ll be live streaming, live tutorials, DJ shows and track analysis which I’m really excited about.

You also have the range of Propa clothing…

Yeah, this is the ‘Genre Series’ where we pick a genre and we just put it out there. It’s only up for a month and then it disappears keeping it limited edition. Propa Drum and Bass, Propa Hardcore, Propa Junglist, Propa Old Skool… I love wearing it and just want to represent everything that’s touched me in some way from three decades in the scene.

‘United Nation: Three Decades of Drum and Bass’ is available now in cinemas and on all digital platforms and Sky Box Office.