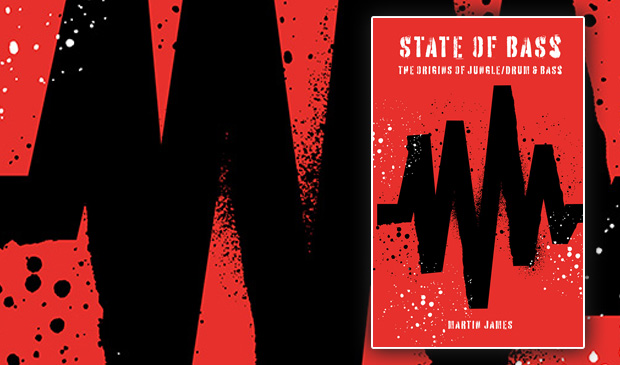 Originally published in 1997, “State of Bass: The Origins of Jungle/Drum & Bass” was the first extensive telling of the birth of the jungle movement and over 20 years later remains one of the most authoritative accounts of the global phenomenon.

This new edition extends the original text to include the award of the Mercury Prize to Reprazent and features previously unpublished interviews with Roni Size, Goldie, LTJ Bukem, Fabio, Shy FX and other key players from the early years of the scene.

Early chapters explore the origins of the scene in a way that no TV documentary has ever been able to bring itself to do – hardcore lives! Yup, no brushing hardcore under the carpet or making the monumental jump from acid house to superclubs to be found here!

In fact, it’s these early chapters I found the most fascinating for that very reason. Rarely in documentaries on the subject have we seen such in-depth of analysis of the darkcore sounds of the first half of the nineties. This book explores that period of time when breakbeat hardcore took a darker path and produced some of the finest records of the genre. Commenting on the way in which the media’s interest in the rave scene moved on the author notes, “suddenly producers who had been scoring top fifty chart hits with their bedroom produced hardcore tracks were placed into a darkened space”, and allowed to “embrace their creativity once again”.

Each chapter is accompanied by a playlist which makes for essential listening because as much as this is a fascinating study of a period of time we all got here via a love of the music. Reading the stories around some of the scene’s most iconic tracks never gets old – tracks like ‘Valley of the Shadows’, ‘Renegade Snares’, ‘Pulp Fiction’ and ‘Angel’ are just some of those whose historical significance is given due note.

The book is filled with numerous insightful interviews or quotes including – and not limited to – DJ SS, Goldie, T-Power, LTJ Bukem, DJ Rap, Fabio, Randall and many more. Interesting anecdotes abound including DJ Rap’s very unfortunate playing out of ‘Mr Kirk’s Nightmare’ while a party-goer was tragically stabbed and killed in the crowd – a story she repeated again recently in her autobiography. Goldie’s short-lived feud with Keith Flint is an interesting look at what happens when an underground movement starts to spill into the mainstream. This book has no agenda and the scene is always celebrated and documented with honesty.

The original edition of this book was the first to tell the story of the “Jungle Committee” – the self-appointed group dedicated to keeping the integrity of the jungle scene intact. The thought of such a thing is really quite bizarre now but the ostracising of General Levy is something that has since passed into legend and given great coverage here.

You won’t find another book that gives so much care and detail to the facts and is written by an author with such a clear love for the source material.

Within the first few lines you’re asked “do you remember the first time you heard the call of the jungle massive?” – if, like many, you get goosebumps just thinking about it, this book is for you.

“State of Bass: The Origins of Jungle/Drum & Bass” is available here.