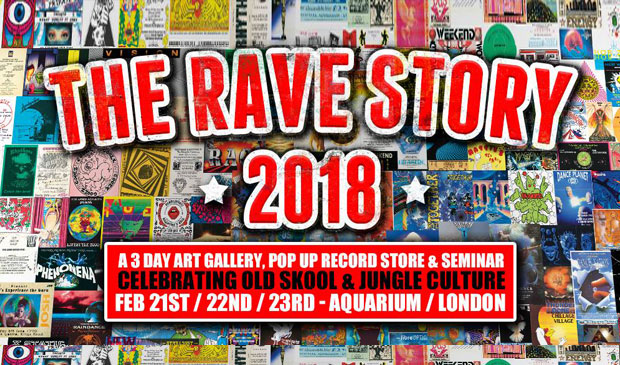 In 2016 a unique event was established in the old skool and jungle calendar – a three-day series of seminars (featuring influential characters from the 88-92 rave scene), an art gallery showcasing paintings, flyers and photography, and a pop-up record store for avid vinyl hunters.

Two years on, and now established as an annual event, The Rave Story 2018 is set to return this month with an even greater offering. Building on the success of previous years it now plays host to a number of workshops including a DJ workshop with Lipmaster Mark and Mark Archer, and an MC workshop with Evenson Allen and Navigator. Not many people can say they’ve had a masterclass of that calibre! 2 Bad Mice and Billy Daniel Bunter will also be sharing their collective wisdom and hosting a label workshop – learn everything you ever wanted to know about running a record label.

Also new this year is the Rave Authors Corner featuring a number of authors from the various rave-inspired books from the past 25 years.

What’s made The Rave Story such a success in previous years is that it’s succeeded in taking an holistic view of the scene – celebrating the many aspects that helped shape a unique culture. The appeal of the early rave scene went beyond simply music – it was a cultural revolution that broke down societal barriers and brought together people of all backgrounds regardless of ethnicity, age or sexuality. It embraced creativity, had a hippy-like attitude to peace and love, and allowed a generation of young people to have complete freedom of expression. Simply put, early rave culture was greater than the sum of it’s parts, and The Rave Story covers all bases.

The Rave Story 2018 takes place over 3 days – Wednesday 21st to Friday 23rd February – and features an impressive roster of speakers. Across several distinct seminars/Q&A sessions, prominent figures representing many facets of the scene will speak on different aspects of rave culture, including pirate radio, event promotion, record labels, DJing and MCing. As usual this years line-up is solid – see below – and features a range of key players from back in the day.

Entry to the record store and art gallery is free between 11am and 6pm each day and this year we can expect a Pez and Junior Tomlin gallery, a DJ Vibes flyer exhibition, and a large number of original rave jackets on display courtesy of Tristram Bentley. Pez & Junior Tomlin will also be auctioning off their first ever canvas together made exclusively for The Rave Story 2018 with all money raised going to Centre Point.

Each seminar takes place between 7pm and 11pm and includes a licenced bar featuring a rave-themed menu and cocktails. On the final evening (Friday 23rd February) a number of DJs and MCs from across the three days will play at an all-night rave. Artists playing at this years event include Billy Daniel Bunter, Uncle Dugs, 2 Bad Mice, Nicky Blackmarket, Fat Controller, Ragga Twins, Flux and Chalkie White.

The Rave Story 2018 is being held at Club Aquarium (London) and tickets are still available. The Rave Generation will be there to cover the event so expect a full review later in the month!

This year’s line-up – with more to be confirmed – is as follows:

Promoters Seminar (original promoters with the focus on lost venues):

Artists Seminar (from then to now):

If you’re unable to make it this year but want a taste of some of what you’re missing you can get audio copies of the previous two year’s seminars in a 12-CD pack from Music Mondays – check out our review here.

Tickets for The Rave Story 2018 are available from Music Mondays.