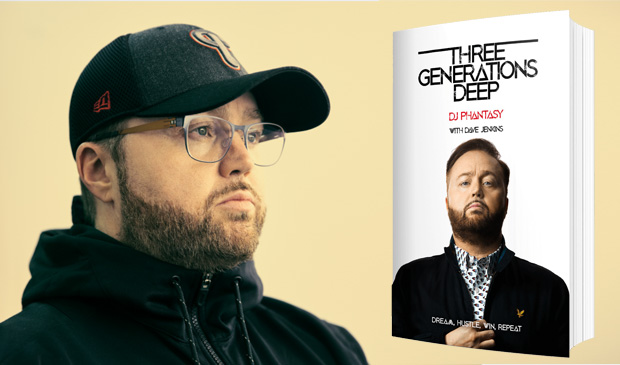 In the summer of ’92 I was introduced to the underground hardcore scene via a bootlegged recording from Fantazia Summertime. The sound quality was shocking and the roughly photocopied cover didn’t exactly scream quality but this was a set that has stayed with me ever since. My only complaint is that it was just 30 minutes long. The man behind the decks was DJ Phantasy and ‘Three Generations Deep’ is his story.

As you’d expect from one of the founding figures of the jungle/drum & bass scene, Phantasy (real name Stephen Hannon) is a man with many tales to tell. However, ‘Three Generations Deep’ is so much more than a chronological telling of anecdotes. Yes, it’s a story that’s obviously set against the large and colourful backdrop of the burgeoning rave scene and the rise of drum and bass, but it’s also a very personal story, often self-examining and reflective.

Far from a self-aggrandising telling of events it quickly becomes clear that ‘Three Generations Deep’ isn’t written by someone intent on rewriting history or glorifying their own achievements. Hannon’s willingness to share self-doubts and personal lessons make him a relatable character that’s very easy to connect with. He also has a great line in self-deprecating humour and isn’t afraid to be the butt of the joke such as the time when an encounter with an admiring fan at 50,000 feet is brought to an abrupt end with the ego-crushing line “are you Simply Red”!

With roots that go way back to acid house and hardcore Phantasy started his career at a time when Grooverider, Carl Cox and RatPack could all share the same bill and the rave scene had yet to fragment. His early friendship with Cox spans several chapters of the book and makes for fascinating reading and gives real insight into the machinations of the music industry.

In fact, for those interested in the musical history of the rave scene there are plenty of behind-the-scenes stories that serve to connect the dots, from memories of Fantazia Summertime and an appearance on ‘Hitman & Her’ to Phantasy’s producing partnership with Gemini and studio work with Ron Wells. Unexpectedly there’s even an early 90’s anecdote involving a union-jack-wearing red-head that had yet to become a household name.

To use a reality TV cliché, Phantasy’s journey hasn’t always been plain sailing and those years when the work wasn’t so readily available are given just as much coverage. This is a life laid bare featuring accounts of straight-talking discussions with good friend DJ Hype and countless moments of introspection.

Later chapters document Phantasy’s championing of MC culture ultimately culminating in the unprecedented phenomenon of SaSaSaS. You might already know how it plays out but you can’t help but feel the buzz when you read his accounts of those early WestFest and Rampage gigs – after 27 chapters you find yourself heavily invested and can’t stop turning the page.

Whether you know Phantasy as one of the old skool originators or as the drum and bass pioneer that currently presides over SaSaSaS, this is a book for your generation. ‘Three Generations Deep’ is an entertaining and engaging read that comes highly recommended.

Oh, and one final thing… There’s a reason why that legendary set at Fantazia Summertime was just 30 minutes long but if you want to find out why you’re gonna have to click here!