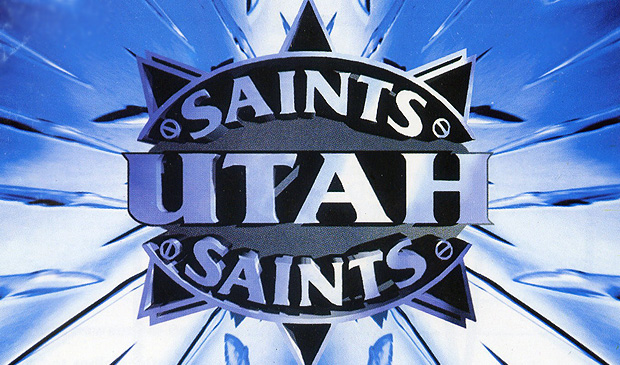 1993 was a time of real transformation and division within the rave scene. Darker breakbeats were diverging from the euphoric sounds of happy hardcore, while events were becoming increasingly focussed by catering for one genre over another. It was against this backdrop of tribalism that Utah Saints released their eponymous album; an album that straddled numerous genres and enjoyed both commercial and critical success.

The success of “Something Good” and “What Can You Do For Me” led to them being falsely pigeon-holed as a “rave band”, with both tracks being featured on numerous compilation albums, rubbing shoulders with other rave anthems of the time. However, the release of their debut album helped signal a watershed in a scene that was only just warming to the idea that dance music and rock music might actually have a shared energy. It was several years before the concept would be further explored by the Prodigy and The Chemical Brothers among others.

To celebrate the 25th anniversary of the release of their debut album we caught up with Tim Garbutt (one half of the band alongside Jez Willis) to discuss the formation of the band, the story behind the album, and the early rave scene.

Let’s start at the beginning – how did the band come to be?

Jez and I actually met in a club on a Saturday night. He was DJing playing Funk, Disco and Hip Hop, and I was DJing in the same club as I’d had a house night on the Friday. We’d both done projects separately – Jez had been in industrial bands and had releases on his own label and I had put out some house stuff on a Sheffield label called Ozone. I’d also been a DJ for quite a few years coming from Hip Hop and the whole DMC/Technics scratch thing. I was actually in the DMC’s in 1988 and got to the semi’s.

One night Jez rocked up on the Friday night with a cassette of a track which was the basis of “What Can You Do For Me“, our first single. He had been down to Woolworths (remember them!) and had bought some CDs from the bargain bin. One of those happened to be Eurythmics’ “There Must Be An Angel“. I played the track at the House night and it went down really well. Then I ended up going in the studio with him and working more on the track and that’s how we were born as Utah Saints.

What are your memories of the early rave scene and to what extent did it inform the first album?

The early rave scene was amazing but total chaos. It had this energy to it because you could feel that something was building  – it was anti-establishment and a movement just like punk. Everybody lived for the weekends. When “What Can You Do For Me” was released we were going around the UK and playing at lots of raves every weekend and sometimes two or three a night.

It was a great time; just really exciting to be there at the start of this whole thing. As a DJ you would have to travel all over to get your records – you had to be on it as there was no internet and you couldn’t just download new tracks or make your own edits like you can today. If you didn’t go shopping every week then you’d miss out as there were limited white labels that were only available in certain cities. It was all about the music. Of course we drew on this when we made our first album but equally we tried to draw on our individual backgrounds of where we’d come from musically. We would both pull the music in different directions hence why our albums were not always straight 4/4 dance tracks as it reflected our influences at those specific moments in time.

Given the diversity of the tracks on the album, did you actually perceive yourself as a “rave band” at the time?

We didn’t see ourselves as a straight up rave band at the time like Altern-8 or Shades Of Rhythm for example but we were on those line-ups because two of our biggest tracks were big rave anthems. We kind of just went with it.

We were never that rave PA band though with a singer miming the vocals and two guys on keyboards – we presented it differently to the others. Nothing we did was ever intentional and there wasn’t ever a big master plan. There was a gap of a year in between the first two singles and it was only when it started to go off in the States that we decided to make an album. We only had six weeks to make that record! Before that we just wanted to make one-off dance tracks for the clubs. At that time there was more separation between genres so you couldn’t really like rock music and dance music – it was either one or the other, and we became labelled as a dance act.

The album featured a range of musical styles – was it a conscious decision to avoid being pigeon-holed as one genre or another?

We just knew that we had a lot of different influences and we wanted to get that out on our record. At that time dance acts didn’t really sell albums as this was before the time of acts like The Chemical Brothers and Daft Punk.
We felt that we couldn’t just put out ten tracks that were all 4/4 uptempo bangers and we wanted it to be more diversified. We also wanted to be able to take it on tour as a live project as traveling around doing “PA’s” at raves was fun but there was only so far that you could take it as the raves were not really geared up to do a live show. The Pa’s at the time were just 15 minute shows to keep the energy of the night going.

Was it always your intention to release an album or was it prompted by the success of the singles?

As I’ve mentioned it was prompted by “Something Good” going off in the states, plus in order for the label to get behind us they needed an album, so we thought it was the right step. Our original intention with “What Can You Do For Me” in 1991 was to just press it ourselves, put it in the shops, and raise enough money from the sales of the first to do the next. We were lucky as we’d sent a copy to Pete Tong to possibly play on his Radio 1 show and he played it in the first week which freaked us out a bit! He was also A&R at FFRR (London Records) and he rang us the week after he’d played it and signed it straight away. Three months later it was top ten so it was all a bit crazy and seemed to move fast.

It was an exciting time for music as chart places weren’t based on streaming or other factors but purely on sales of vinyl, cassettes and CDs from Monday morning to Saturday night. You were getting all the records flying into the top ten without any daytime radio support and based purely from the kids hearing the music in clubs, specialist radio and raves. It was real!

In 1993 your first album took pride of place alongside The Prodigy Experience, Altern 8’s “Full On Mask Hysteria”, Shamen’s “Boss” Drum and Orbital 1 and 2. It must have been an exciting time to make music. Do you keep in touch with any of your contemporaries?

Thank you – great to be in such good company! We still see some of these guys occasionally and bump into each other at gigs, especially Altern-8 and Orbital. It was a great time to be making music. Some classic records that have stood the test of time were made in this period and it’s always something to be proud of to have been right there at the beginning.

You famously received Kate Bush’s permission to sample her work at a time when many artists didn’t. Did you ever run into difficulties with sample clearance on later projects?

We never really ran into any difficulties on sample clearance as we always tried to be creative with the samples we used. We avoided using someone else’s chorus or the essence of their track. We were lucky as we were ahead of the game on this and to be able to get sample clearances from the likes of Annie Lennox, Kate Bush, The Human League, or Metallica for example told us that we must have been doing something right. We knew of cases later on where other people had tried to clear samples and had been knocked back so we were lucky.

“Something Good 08” and “What Can You Do For Me” have been subject to very popular remixes by High Contrast and Drumsound & Bassline Smith. Is drum and bass a genre you’re especially drawn to or was it the particular artists themselves?

Both of those mixes were instigated by ourselves and weren’t a record company decision. We’ve both always loved drum and bass and still do. We used to run a club night in Leeds called Sugarbeat and we also hosted Hospital Records’ “Hospitality” night so we already knew Lincoln (High Contrast). Simon (Bassline Smith) also played a few times so we just asked them and they were both happy to be involved. We still curate a stage at Beatherder Festival where we put on acts we’re into and we always have some drum and bass acts on the line up.

Several electronic artists have developed live shows over the years but that’s something you actually started out doing. Do you miss performing as a live band?

We loved doing the live band thing as we got to tour all over the world and it was great fun. It’s something we miss and would be tempted to do again if the circumstances were right. We always had really strong ideas about how we wanted to present it live and hence it was always really expensive to tour.

You have a number of events coming up over the summer – what can audiences expect from a Utah Saints gig?

We still keep on top of our music, so yes we always play the hits, but we play new stuff as well as old and haven’t just gone down the retro route. We are very selective about what gigs we play.

What’s next for the band?

We have a busy summer and are playing festivals in both July and August. You can check out the dates on our Facebook and SoundCloud pages. As for new music, yes that is something we hope to do. We’ve also been working through our old material and have noticed that there are a lot of tracks and remixes which aren’t available online in places like Spotify so we hope to get these out at some point.

If you only know Utah Saints from the singles I’d urge you to give the album a spin; it’s mix of the upbeat and euphoric, with the down-tempo and emotional, make it a timeless listening experience and an album worth celebrating.

You can check out the band’s festival dates here.

The album “Utah Saints” is available via Amazon.